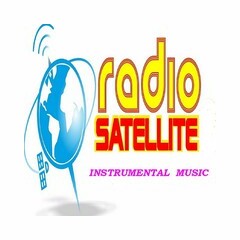 Below in French / Plus bas en langue Française He wrote such well-known music as the theme for The Tonight Show Starring Johnny Carson and one of Tom Jones's biggest hits, "She's a Lady", as well as the English lyrics on Claude François and Jacques Revaux's music, for Frank Sinatra's signature song, "My Way", which has been covered by many including Elvis Presley. He was inducted into Canada's Walk of Fame in 2005.

An additional song that Jackson co-wrote with Anka from this 1983 session, "Love Never Felt So Good", was since discovered and was released on Jackson's posthumous album Xscape in 2014. The song was also released by Johnny Mathis in 1984.

Anka became a naturalized US citizen in 1990.

Anka was born in Ottawa, Ontario, to Camelia (née Tannis) and Andrew Emile "Andy" Anka Sr., who owned a restaurant called the Locanda. His parents were both  Christians.

Anka's father (Andy) was Syrian-American from ’3ouyoun el wadi , Syria from the Na'Nou' family and his mother (Camelia) was Canadian-Lebanese "from the town of Kfarmishki, Rashaya District, in Lebanon."

Anka sang with the St. Elias Antiochian Orthodox Church choir under the direction of Frederick Karam, with whom he studied music theory.

He studied piano with Winnifred Rees. He attended Fisher Park High School, where he was part of a vocal trio called the Bobby Soxers.

Paul Anka recorded his first single, "I Confess", when he was 14. In 1957, with $100 given to him by his uncle, he went to New York City where he auditioned for Don Costa at ABC, singing what was widely believed to be a lovestruck verse he had written to a former babysitter.

In an interview with NPR's Terry Gross in 2005, he stated that it was to a girl at his church whom he hardly knew.

The song "Diana" brought Anka stardom as it rocketed to No. 1 on the Canadian and US music charts.

"Diana" is one of the best selling singles ever by a Canadian recording artist.

including "It's Time to Cry", which hit No. 4 and "(All Of a Sudden) My Heart Sings", which reached No. 15, making him (at 17) one of the biggest teen idols of the time. He toured Britain, then Australia with Buddy Holly.

"It Doesn't Matter Anymore" has a tragic irony about it now, but at least it will help look after Buddy Holly's family. I'm giving my composer's royalty to his widow – it's the least I can do. Paul Anka's talent included the theme for The Tonight Show Starring Johnny Carson (reworked in 1962 from a song Anka wrote earlier called "Toot Sweet"; it had been rewritten with lyrics and recorded by Annette Funicello in 1959 as "It's Really Love").

In the 1960s, Anka began acting in motion pictures as well as writing songs for them, most notably the theme for the hit film The Longest Day (which also was the official march of the Canadian Airborne Regiment), in which he made a cameo appearance as a US Army Ranger. For his film work he wrote and recorded one of his greatest hits, "Lonely Boy".

He also wrote and recorded "My Home Town", which was a No. 8 pop hit for him the same year. He then went on to become one of the first pop singers to perform at the Las Vegas casinos. In 1960, he appeared twice as himself in NBC's short-lived crime drama Dan Raven.

In 1960, Anka signed with RCA Victor. He bought the rights and ownership of his ABC-Paramount catalog in 1963, but like most North American recording artists saw his career stalled by the British Invasion.

By the late 1960s, his career focused on adult contemporary and big-band standards, played regularly in Las Vegas.

In the early 1970s, he signed with Buddah Records, putting out two albums, a self-titled and Jubilation. The former, first released in 1971, bore the track "She's A Lady", a song he wrote that would become a signature hit for Welsh singer Tom Jones that same year. However, Anka failed to make a chart success of his own version. Frustrated after more than ten years without a top 25 hit record, Anka switched labels again, which marked a turning point in his career.

This time he signed with United Artists and in 1974 teamed up with Odia Coates to record the No. 1 hit, "(You're) Having My Baby", exposing Anka to a new generation of fans and proved his staying power among his original fan base that was now maturing.

Anka also wrote five songs which were included on an album by Don Goodman.

In 1975 he recorded a jingle for Kodak written by Bill Lane (lyrics) and Roger Nichols (melody) called "Times of Your Life".

It became so popular Anka recorded it as a full song, which peaked at No. 7 in the US pop chart in 1976. The follow-up was another hit that Anka wrote for Sinatra, "Anytime (I'll Be There)", peaking at No. 33.

Anka's last Top 40 hit in the US was in the summer of 1983: "Hold Me 'Til The Mornin' Comes", which included backing vocals from then-Chicago frontman Peter Cetera; it hit No. 2 on the Hot Adult Contemporary chart.

His 1998 album A Body of Work was his first new US studio release since Walk a Fine Line in 1983; vocalists and performers included Celine Dion, Kenny G, Patti LaBelle, and Skyler Jett.

The album included a new version of "Hold Me 'Til the Morning Comes", once again performed with Peter Cetera. In 2005, his album of big-band arrangements of contemporary standards, Rock Swings, provided a mainstream comeback of sorts that saw him awarded a star on Canada's Walk of Fame in Toronto.

On October 12, 2009, Anka stated that Michael Jackson's new release titled "This Is It" was a collaborative effort between the two in 1983.

According to Anka, after recording the song, Jackson decided not to use it and the tune was then recorded and released by Sa-Fire.

After Anka threatened to sue for credit and a share of royalties, the administrators of Jackson's estate granted Anka 50% of the copyright.

An additional song that Jackson co-wrote with Anka from this 1983 session, "Love Never Felt So Good", was discovered shortly thereafter. His album Songs of December charted at No. 58 in Canada in November 2011.

Already locally famous as a teenage idol for his songs in English, Anka hit the Italian market with "Summer's Gone" in 1960; it was released as "Dove Sei".

The record got immediate success, reaching No. 4 on Italian hit lists, opening a promising foreign career. Anka then underwent an intense collaboration with Italian musicians of the time, including composer/director Ennio Morricone, singer-songwriter Lucio Battisti, and lyricist Mogol.

but the Italian charts list at least six other songs he interpreted or recorded in Italian. His top hit was "Ogni giorno" which scored No. 1 in 1962, followed by "Piangerò per te" and "Ogni volta", which reached both No. 2, in 1963 and 1964. "Ogni volta" ("Every Time") was sung by Anka during the Festival di Sanremo of 1964 and then sold more than one million copies in Italy alone; it was also awarded a gold disc.

He returned to San Remo in 1968 with "La farfalla impazzita" by Battisti-Mogol. On that occasion the same title was interpreted by Italian crooner Johnny Dorelli.

The pair of singers, however, were eliminated before the final stage of the competition. Anka, maybe only coincidentally, left the Italian scene shortly thereafter. In 2003 Anka came back with an exclusive concert in Bologna, organized by the Italian company Mapei during the CERSAIE exhibition. He recorded a version of "My Way" with alternate lyrics dedicated to the sponsor of the evening.

In 2006, he recorded a duet with 1960s Italian hitmaker Adriano Celentano, a new cover of "Diana", with Italian lyrics by Celentano-Mogol and with singer-songwriter Alex Britti on the guitar. The song hit No. 3. 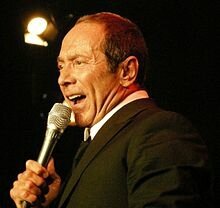 With less success than in Italy, Anka tried the French market as well. Several songs by Anka with French lyrics are known: one reported by the Italian charts ("Faibles Femmes", 1959) and another reported by his official discography ("Comme Avant") with Mireille Mathieu.

A single release in Japanese ("Kokoro No Sasae"/"Shiawase E No Tabiji") is also reported on his discography. In 1993 he recorded a duet with Filipino singer Regine Velasquez entitled "It's Hard to Say Goodbye", included in her album, Reason Enough. This song was re-recorded several years later by Anka and Celine Dion and was included in his album A Body of Work.[citation needed]

Anka was married to Anne de Zogheb, the daughter of a Lebanese diplomat, Charles de Zogheb, from February 16, 1963, until 2001.

The couple met in 1962 in San Juan, Puerto Rico, where she was a fashion model on assignment and under contract to the Eileen Ford Agency. Zogheb, brought up in Egypt, is of Lebanese, English, French, Dutch, and Greek  descent.

The couple married the following year in a ceremony at Paris-Orly Airport. She quit modeling after their second child was born. They have five daughters: Amelia, Anthea, Alicia, Amanda (married to actor Jason Bateman), and Alexandra.

In 2008, Anka married his personal trainer, Anna Åberg, in Sardinia.

They divorced in 2010 and Paul has full custody of their son, Ethan. Anna was featured in the Swedish TV3 show Svenska Hollywoodfruar (Swedish Hollywood wives).

In 1972, a street in Ottawa was named Paul Anka Drive. In 1981, the Ottawa City Council named August 26 as "Paul Anka Day" to celebrate his quarter-century in show business.

On September 6, 1990, he became a naturalized citizen of the United States.

Anka has written an autobiography, My Way, co-written with David Dalton.

Donny Osmond & Paul Anka Do A Medley Of Hits

Anka's first acting role in a major film was in a cameo as an army private in The Longest Day (1962). He also composed the title song to the movie. During the late 1950s and early 1960s, he starred in such teen exploitation films as Girls Town (1959) and Look in Any Window (1961), in which he played a peeping tom.

He guest-starred as a murder suspect in one of the Perry Mason Made-for-TV movies, The Case of the Maligned Mobster (1991). Anka was the subject of the 1962 National Film Board of Canada documentary Lonely Boy, considered a classic work of cinema verite.

He wrote and performed songs in a 1985 Canadian children's Christmas cartoon, George and the Christmas Star.

In American Idol's seasons 2 and 3, he made a special appearance and sang an adapted version of "My Way" that mocked the format of the show, as well as participants, judges, and the host. The performance was praised as "One of the Best Moments in American Idol."

He was also the namesake of Lorelai's dog in Gilmore Girls and made an appearance in a dream in which both dog Paul Anka and real Paul Anka interacted.

In the mid-1980s, Anka was secretly recorded while launching a tirade against his crew and band members, berating them for behavior that he considered unprofessional. When asked about it on the interview program Fresh Air, he referred to the person who did the recording as a "snake we later fired".

The recording became widely known after being uploaded to the Internet and a number of quotes from it have since become famous, including "The guys get shirts!"; "Don't make a maniac out of me!"; and "Slice like a fucking hammer!".

Some of the quotes were reproduced verbatim by Al Pacino's character in the 2007 film Ocean's Thirteen.

He was mentioned in the "Fish Licence" sketch in the tenth episode of Series 2 (23rd overall) of Monty Python's Flying Circus, which was first broadcast on December 1, 1970.

Dealing with a postal clerk (Michael Palin) who thought it absurd to give all of one's pets the same name, Praline, (John Cleese) countered that there was nothing wrong with it, citing Mustafa Kemal Atatürk as an example.

To support his argument, he submitted as evidence an entry from the book "Kemal Ataturk, the Man by E.W. Swanton with a foreword by Paul Anka."

In the cold open to the episode "The Real Paul Anka", both Paul Ankas were featured in a dream sequence Lorelai describes to her daughter, Rory. 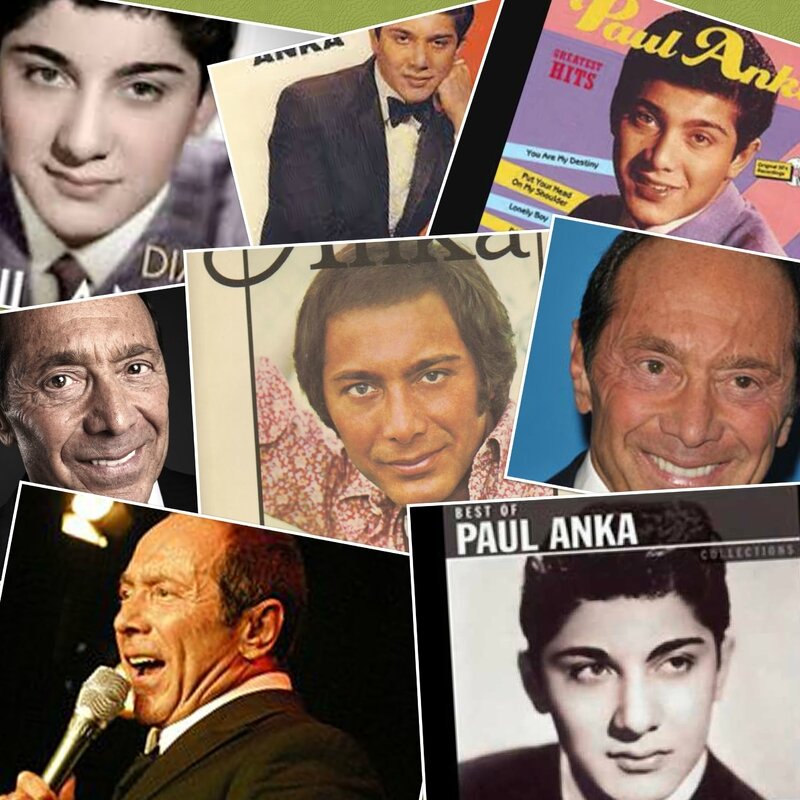